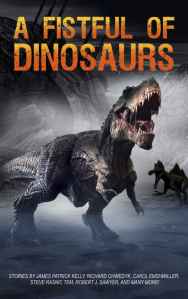 A Fistful of Dinosaurs is an anthology of 17 stories about dinosaurs… kinda. Featuring a mix of previously published stories and brand new works, apparently the only criterion for inclusion was that a story had to reference dinosaurs in some way. As a result, you get works like “Dinosaurs” by Walter Jon Williams, a story set in the far future that has absolutely nothing to do with the terrible reptiles. (The title is a metaphor.)

To be fair, most of the works in A Fistful of Dinosaurs feature the animals. Overall it is a strong collection, bolstered by several award-winning stories and new material that mostly doesn’t disappoint. Among the previously published works are science fiction classics such as “Think Like a Dinosaur” by James Patrick Kelly and “The Measure of All Things” by Richard Chwedyk, both of which really aren’t dinosaur stories but are excellent reading. Stories new to the collection include “Ford T-Rex vs Dodge Triceratops” by Charles Eugene Anderson, involving a dinosaur race in an alternate 1960s U.S.; “The Other Side of the Portal” by Jamie Ferguson, in which a doorway to the Mesozoic Era is discovered beneath London; and “The Serpent of the Loch” by Lou J. Berger, a sequel to Sir Arthur Conan Doyle’s The Lost World that sends Professor Challenger searching for the Loch Ness Monster. For me, the standout among the new material is “The Place Where Camels Fear to Go” by Lucy Taylor, which combines Crichton-esque technothriller with Lovecraftian cosmic horror. The story only suffers from being too short and I hope the author expands it at a later date.

Like any anthology, there are a few clunkers (“Out of the Ashes”), but A Fistful of Dinosaurs is worth a read if you are looking for fiction about dinosaurs—even if in just the loosest sense in some cases.