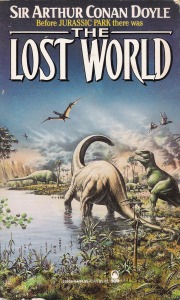 Nests of pterodactyls, hordes of iguanodons, swarms of plesiosaurs still roaming the earth in the twentieth century? Professor Challenger says yes and to prove it he leads an expedition into the deepest jungles of South America. Together, the men – a young journalist, an adventurer, and an aristocrat – along with their bearers and guides, search for the rumored country and encounter savagery, hardship, and betrayal on the way. But things only get worse as they get closer to the hidden world they seek. Trapped on an isolated plateau, menaced by hungry carnosaurs, it begins to look as though the expedition may never return from…

Daily Gazette reporter Edward Malone is in love with Gladys, a shallow, spoiled woman who insists she must marry a hero. So Malone appeals to his editor to assign him to a great adventure, but what he instead gets is an assignment to interview one Professor George Edward Challenger, a menacing and ill-tempered scientist known for throwing reporters bodily into the street. Malone manages to win him over, however, and Challenger revels to the reporter his secret: he has found a “lost world” where dinosaurs have survived to the modern day.

The scientific community is skeptical about Challenger’s claims, but he still convinces them to mount an expedition to test his theories. Soon Challenger, Malone and two other English gentlemen – academic rival Professor Summerlee and great white hunter Lord John Roxton – are penetrating deep into the Amazonian rainforest toward a mystery the frightened natives call “Curupuri.”

The Lost World by Sir Arthur Conan Doyle is the granddaddy of paleofiction (although Jules Verne beat him to it) and in many ways it still remains among the best of the genre. Many clichés of later prehistoric pulp were first established here: the mixing of prehistoric animals from different eras; ape-men and dinosaurs living together; a “lost world” cut off from modern civilization. Doyle’s main character, Professor Challenger, is a fun creation nearly as entertaining as Sherlock Holmes, the author’s better-known hero. And Doyle strikes exactly the right balance between mystery, adventure and humor in a plot that never seems to have a dull moment.

Readers should be warned that The Lost World is very much a book of its times. Written around the turn of the 20th century, it’s laced with racism and sexism, and what is supposed to be the characters’ most heroic moment now comes off simply as genocide. Try to enjoy the novel for all the things it does right, but if these problems are still too much to put out of mind, look at it as a window into an era and a mindset that are now as thankfully extinct as the dinosaurs roaming its pages.