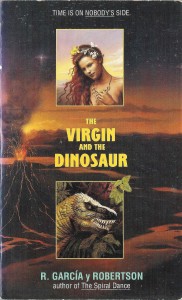 IT WAS SUPPOSED TO BE A SIMPLE TRIP TO THE MESOZOIC…

In a far-future Megapolis free of disease, pollution, and money, Jake Bento is master of the wormhole – until an unforeseen catastrophe nearly strands the professional time traveler and his beautiful young paleontologist companion Peg in a world of huge extinct beasts. Luckily, Jake’s deft manipulation of wormhole technology can bring them home – after several stopovers in more manageable eras – with enough 3V recordings to make them both legends in their own, and other, times.

There are those, however, who resent such newfound celebrity – specifically Jake’s dangerous erstwhile employers at FASTER-THAN-LIGHT. And now Peg and Jake must watch their backs, from the Pleistocene to the present. For there are no treacheries their enemies won’t stoop to – and no time in which to hide.

Who says you can’t judge a book by its cover? The Virgin and the Dinosaur is a 1996 novel by R. Garcia y Robertson that promises two things: 1) A virgin and 2) a dinosaur. I can report that it delivers on both. In fact, when it comes to the latter the book delivers in spades, as there are quite a few prehistoric creatures tucked between its covers. The only problem is readers must wade through a lot of filler to get to the dinosaur action.

The Virgin and the Dinosaur opens in Late Cretaceous Montana with the aforementioned virgin — a French paleontologist named Peg — stepping nude into a forest clearing. Running around in your birthday suit doesn’t seem a particularly wise idea as we are told that mosquitoes “as big as hummingbirds” are flying around, but Peg is the free-spirited type. Enjoying the view is fellow time traveler Jake Bento, who is supposed to be guarding Peg but instead spends most of his time trying to get into her pants. (That is, if she wore pants.) Peg and Jake have a series of adventures before traveling forward in time to pre-Civil War America and then to the far future, where their journeys have turned them into celebrities. However, their newfound fame has made an enemy of Jake’s employer, who realizes the duo now have the power to start their own time travel business and become competitors. The only way to stop Jake and Peg is to ruin their reputations by any means necessary.

Perhaps the most off-putting thing about The Virgin and the Dinosaur is its lack of any real plot. The novel actually is a collection of adventures linked together by a thin narrative arc. This isn’t surprising as the first half of the book was originally published as two separate novellas, but it comes off as disjointed as a result. The story loses its footing in the slower-paced second half, although the pace picks up again near the end. That said, the good parts are really good. Robertson has a knack for writing action scenes, and he throws in just enough twists to keep things interesting. The Mesozoic scenes in particular stand out, although they make up only a third of the novel. Unfortunately the characters are not quite as well written. Peg exists solely as an object to be lusted over. Jake spends a good chunk of the novel more interested in sex than anything else, and his infatuation with Peg is more than a little creepy. I guess The Virgin and the Dinosaur was trying to be sexy, but the book is so clumsy at it that its efforts come across as awkward instead.

The Virgin and the Dinosaur isn’t a bad book, but it has too many problems to be memorable. Robertson should have devoted more of the novel to his characters’ Mesozoic adventures. It also would have helped had he dialed back on Jake’s raging hormones. I guess what I’m saying is I wanted less virgin and more dinosaurs.