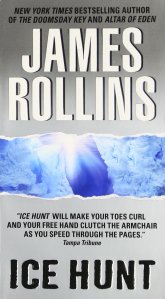 Carved into a moving island of ice twice the size of the United States, Ice Station Grendel has been abandoned for more than seventy years. The twisted brainchild of the finest minds of the former Soviet Union, it was designed to be inaccessible and virtually invisible. But an American undersea research vessel has inadvertently pulled too close—and something has been sighted moving inside the allegedly deserted facility, something whose survival defies every natural law. And now, as scientists, soldiers, intelligence operatives, and unsuspecting civilians are drawn into Grendel’s lethal vortex, the most extreme measures possible will be undertaken to protect its dark mysteries—because the terrible truths locked behind submerged walls of ice and steel could end human life on Earth.

You wouldn’t peg Ice Hunt as paleofiction by its cover or its blurb, but it passes the test. In this case, the plot hinges around the survival of the famous “walking whale” Ambulocetus.

Ice Hunt starts when an experimental U.S. Navy submarine finds an abandoned military base carved into the side of an iceberg in the Arctic Ocean. The scientists aboard the sub learn that the berg is crisscrossed with tunnels, with strange creatures frozen in the ice. Meanwhile in Alaska, game warden Matthew Pike investigates a plane crash in the wilderness and comes across the sole survivor — a reporter on his way to the hidden base. The two are immediately set upon by assassins and must race to the arctic to uncover why they have been targeted. And to make a bad situation even worse, a Russian admiral also is seeking the secret hidden in the iceberg, and he has his finger on the trigger of a doomsday weapon.

I was pretty forgiving with Rollins’ first novel, Subterranean, which I enjoyed despite its numerous flaws. I couldn’t do the same with Ice Hunt, which was his fifth novel and showed all the same weaknesses as his first. The novel is all about action, action, action! The characters are constantly running from something, be it Russian assassins or hungry walking whales, but many of the action scenes strain credibility. Until I read the book, I never knew that 1) bear spray has the same effect as battery acid on human faces, 2) you could fly a small Cessna full of people through a mountain range like Luke Skywalker through the Death Star and still make it across Alaska on a single tank of gas, or 3) you could have a nuclear bomb detonate right beside you and come out without a scratch.

Suspension of disbelief only goes so far — it shouldn’t be used as an excuse for lazy writing.

Another problem with the novel is it’s too convoluted. Ice Hunt would have worked well simply as a thriller about a group of scientists who make an extraordinary discovery that turns terrifying when the hibernating walking whales emerge from their slumber. Rollins actually has a good explanation for the survival of the prehistoric critters and what their discovery may mean for science. Unfortunately, that wasn’t good enough for the author, who had to throw in a government conspiracy, some post-Cold War politics, and a doomsday device that would make Dr. Strangelove squeal with joy. The monsters eventually take a backseat to all the other, less-interesting plot elements as a result.

Yet again, we have another work of paleo-fiction where a little subtlety would’ve gone a long way toward making it a better read.