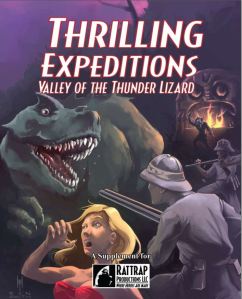 Thrilling Expeditions: Valley of the Thunder Lizard allows players to play big game hunters in a lost valley populated with creatures from before the rise of man, or have their pirates going ashore on an island where Neanderthals battle Saurians, or time traveling tourists suddenly stranded in Earth’s distant past.

This title will add dinosaurs not only to the .45 Adventure system, but to Gloire and Fantastic Worlds. In addition, the book will provide a Big Game Archetype for each of the three game systems. This release will allow players who may enjoy more than one of our games, the chance to get one book to cover all three.

The Valley of the Thunder Lizard is the first of the Thrilling Expeditions series of supplements. These supplements will be heavy on scenarios with at least one multi-part scenario for each game system. These scenarios should provide you with plenty of ideas for your own games.

So grab your rifle and prepare for Thrilling Expeditions!

Valley of the Thunder Lizard is a supplement for three tabletop miniatures gaming systems by Rattrap Productions, all of which share the same basic mechanics. “Miniatures games?” you say. “You mean like Warhammer 40K?” Actually, no. Warhammer games usually involve dozens of miniatures scattered across a large tabletop. The beauty of Rattrap’s systems is they are designed to be played with only a few 28mm miniatures in an area that can be a small as 2×2 feet. Building large Warhammer armies is expensive. Rattrap’s systems are designed for gamers on a budget.

All three systems use 10-sided dice to resolve conflicts. When attacking, for example, both players roll dice and add any modifiers specific to their figures. The player with the highest number wins the roll. Each figure have seven skills tied to a specific body location. Skills include brains, speed and brawn. When a part of the body takes damage, the associated skill is usually reduced by one point, making it harder to pass any challenges using that skill.

Valley of the Thunder Lizards is a solid supplement for anyone who plays miniatures games. It comes with stats for a wide variety of prehistoric creatures along with rules modeling how different types of animals should behave. There are a fairly large number of multi-part scenarios, each specific to one of the three game systems, although they could easily be adapted to the system of your choice. There is no background about the lost world genre itself as the author assumes players already are familiar with it.

I’m glad I have Valley of the Thunder Lizard although I admittedly don’t use any of its core systems – they are a bit too heavy on record keeping for me, given you must track wound locations (although, to be fair, it is easier than it sounds). Still, the scenarios and the book itself can be scavenged for ideas no matter what system you use. One thing to note is that since the supplement came out, a second edition of .45 Adventure has been published that makes several changes to the rules, including the use of multiple dice. I’m not sure how easily Valley of the Thunder Lizard can be adapted to the new system.