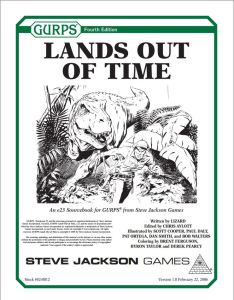 Humans and dinosaurs go together like gamers and pizza. That tens of millions of years separated the last of the dinosaurs from the first of the humans is a mere inconvenience, easily ignored. GURPS Lands Out of Time is a sourcebook for human/dino adventuring, providing all you need to know to place man and giant reptile side-by-side, whether it’s a “Lost World” adventure, caveman slapstick, or something in between. GURPS Lands Out of Time is an e23 original game setting for GURPS.

GURPS Lands Out of Time is a web-only gaming supplement available on e23, the official online store of Steve Jackson Games. It’s mostly about building characters for “lost world” adventures, almost to the exclusion of everything else. One mistake the author made in writing the supplement was his decision to portray dinosaurs like their 1950s B-movie counterparts rather than using modern scientific theories. “(T)he fun of the genre is adventuring with dinosaurs as they should have been, not as a they were,” he writes. Sorry, but it’s not fun for those of us who find modern views of dinosaurs far more interesting than the dim-witted behemoths of yesteryear.

The portrayal of dinosaurs is a small complaint because other than a short bestiary, dinosaurs and other prehistoric animals are surprisingly absent given the subject matter. Most of the book is about creating characters, from cavemen to dinosaur hunters armed with space age weaponry, with a list of advantages, skills and disadvantages suitable to the setting. There also is a disappointingly brief summary of the genre, a few generalized setting ideas and a short campaign setting taking place on a parallel world.

There is really nothing in GURPS Lands Out of Time that any gamer couldn’t come up with on his or her own when designing characters; it basically just spells out the glaringly obvious. A far more useful supplement is GURPS Dinosaurs — also available for download on e23 — which has stats for more than 100 prehistoric creatures and is better researched. Both supplements sell for $7.95 each, but instead of spending the full $15 for both, just buy GURPS Dinosaurs and use the rest of the money to buy snacks for your fellow gamers. They’ll appreciate it.