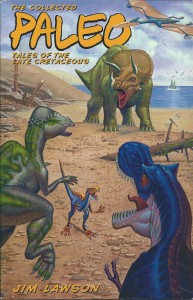 Paleo is a comic for anyone who enjoyed BBC’s Walking with Dinosaurs; that is, a comic that does its best to get the science right and only wanders from that goal when the needs to the story dictate otherwise. There are no humans, and the dinosaurs are, as far as I can tell, appropriate for the Late Cretaceous setting.

The comic was a labor of love for artist Jim Lawson, who has illustrated the Teenage Mutant Ninja Turtle comic books. It was published over eight issues beginning in 2003, with the first six issues later collected in a single volume. There are no colors, this is a black-and-white comic.

Each issue tells the story of a different dinosaur or creature that inhabited the world of the Late Cretaceous. There is some anthropomorphizing of the animals but not to the extent of Age of Reptiles, another dinosaur-only comic. One story concerns an injured Albertosaurus fleeing the predations of its larger cousin, Tyrannosaurus rex. Another story is about a baby Stegocerus on its own after its mother is eaten by a pack of “raptors.” Yet another follows the flight of a dragonfly through a Cretaceous swamp. You get the idea.

Paleo is straightforward in execution and pretty much accomplishes what it sets out to do. There are few happy endings, since this is a fairly accurate portrayal of nature “red in tooth and claw,” but not every story is a downer either. The dinosaurs are anatomically accurate although Lawson tends to exaggerate certain features – giving them oversized feet and calves, for example – and his animals and environments usually lack natural curvature and look a bit blocky as a result. I’m not keen on the stylized art style, thinking Lawson could have used a little softer touch and cut back on the heavy use of ink in some panels, but others may like it.

Whether readers will enjoy Paleo will depend on their personal tastes. This is a comic best suited for dinosaur fanatics – people who enjoy dinosaurs for what they were rather than just seeing them as monsters to be thrown into a story to oppose human heroes. I quite liked it, even though, as already stated, I didn’t particularly care for the art style. If you’re the kind of person whose shelves are lined with non-fiction books about dinosaurs, then this is for you.