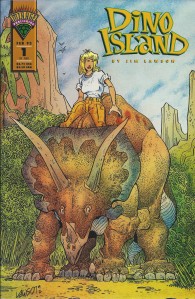 October 1942. Pilot Amelia not-Earhart is attempting to break the record for fastest flight across the Atlantic Ocean when her P-51 Mustang takes an unexpected detour. After passing through a strange atmospheric anomaly, Amelia lands on an uncharted island inhabited by living dinosaurs. She quickly befriends a surprisingly docile Triceratops, encounters a small colony of other castaways, and finds a gigantic alien structure that may explain the island’s existence as well as provide a way home.

Dino Island is a two-issue comic book miniseries published to cash in on the interest in dinosaurs generated by the release of the first Jurassic Park film, which came out the same year. Writer and artist Jim Lawson is best known for his work on Teenage Mutant Ninja Turtles. He is also something of a dinosaur nut, having self-published the wonderful dinosaur comic Paleo: Tales of the Late Cretaceous.

Dino Island isn’t as good as Paleo, in part because the dinosaurs take a back seat to a rather mediocre story about the origins of the island. Two issues were too short for the tale that Lawson wanted to tell. He introduces plot elements that go nowhere and there is no real logic in why anything happens over the course of the story – one moment doesn’t connect to the next. The series also concludes with a downer ending, which is surprising given its light-hearted subject matter.

The art is the bright spot. Lawson draws in a cartoony style that might put some people off, particularly when it comes to his human characters. That said, I found it rather pleasant to look at. I especially liked Lawson’s use vibrant colors, which was a nice change of pace from the black-and-white Paleo.

Dino Island ultimately is a comic that looks better than it reads. If Lawson had chosen a simpler plot and focused more on the dinosaurs, then I think he would have had a winner. Instead we’re left with a comic whose sole claim to fame is as a relic of the dinosaur craze that accompanied Jurassic Park.