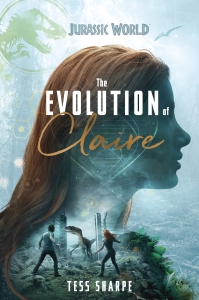 Freshman year in college is full of obstacles — there are messy roommates, cranky professors, and disgusting dining halls. But for Claire Dearing, add “How to properly avoid being eaten by a dinosaur” to that list.

The year is 2004, and Claire has been given the chance of a lifetime: the opportunity to intern at the Jurassic World theme park less than a year before it opens to the public. She is laser-focused, with her sights set on bettering the lives of all animals worldwide. But life at the park isn’t all test-driving gyrospheres and falling head over heels for a fellow student named Justin… though she does that too. Rumors and suspicions flood the island, and Claire is determined to unravel the truth.

As Claire searches for answers, she and Justin find themselves thrust into a sinister plot that will leave Claire forever changed, forcing her to question everything she thought she knew and bringing her one step closer to the Claire viewers met in Jurassic World and who they’ll return to in Jurassic World: Fallen Kingdom.

Author Michael Crichton nearly gave us a different Jurassic Park than the version that hit bookstores in 1990. As he later recounted, early drafts of the novel were told from the point of view of a young boy visiting the park. Crichton sent these drafts to a small circle of people he trusted to review his writing. They hated the story, with one reviewer telling him the novel needed to be targeted at adults. That’s the version of Jurassic Park we ended up with, but nearly 30 years later readers got something approaching those early drafts in the Jurassic World tie-in novel, The Evolution of Claire.

“Claire” in this case is Claire Dearing, the park’s workaholic head of operations who is portrayed by Bryce Dallas Howard in both Jurassic World films. The novel is set roughly 10 years before the first Jurassic World film, when Claire is an idealistic college freshman planning to pursue politics so she can champion animal rights. That’s a far cry from the first film’s cold businesswoman, who refers to dinosaurs simply as “assets.” The novel is about how Claire went from optimistic youth to cynical adult, so I’m not spoiling much by saying this isn’t a story with a happy ending.

In the novel, Claire is part a group of college students selected to intern at Jurassic World before the park opens to the public. She’s excited about the chance to see living dinosaurs, but her family isn’t thrilled about sending their daughter to a place where people have been eaten in the past. Still, they consent, and Claire is soon on her way to take part in one of the most amazing technologi… OMG WHO IS THAT CUTE BOY?! *Cough* Sorry about that. What I meant to say is Claire is in awe at getting to see dinosaurs in the… OH HE’S LOOKING AT ME! Okay, settle down. *Takes deep breath.* Claire is given a once-in-a-lifetime experience, an opportunity… DOES HE LIKES ME? OH NO! DO I HAVE DINOSAUR POOP IN MY HAIR?!!!

No, I haven’t gone boy crazy. Rather, The Evolution of Claire is a young adult novel aimed primarily at a female audience, or at least a publisher’s idea of what that audience enjoys. The original Jurassic Park novel and subsequent movies were all action thrillers with dinosaurs front and center. The Evolution of Claire is a romance with very little action, thrills, or even dinosaurs. While admittedly an interesting genre choice for a Jurassic World tie-in novel, it’s also a little strange. Claire spends the majority of the novel enthralled with a good-looking intern named Justin. (As one character describes him: “That guy looks like a really handsome superhero’s naïve idea of a good secret identity.”) Readers spend more time exploring Claire’s feelings for Justin than they do exploring Jurassic World or having characters interact with dinosaurs. Not helping is Justin himself is a boring character — a “nice” guy who is more a young woman’s ideal version of a boyfriend than an actual human being with flaws. There is nothing wrong with young adult romances, but that’s not the reason people watch the Jurassic Park films. I doubt the novel will satisfy its target audience, no matter what gender its readers are.

When Claire isn’t pining for Justin she having surprisingly juvenile conversations with her college-age friends. It admittedly has been a long time since I was a teenager in college, but a lot of the dialogue reads more like something that would come from the mouths of tweens than university freshmen. (Although a likely reason is tweens are the book’s intended audience.) Claire also spends a good part of the book trying to solve the mystery of whether Jurassic World’s owners covered up the death of an intern who previously visited the park. This mystery is book’s strongest element and is resolved in a way that lets Claire grow as a character. In fact, I would argue the ending of the novel is excellent in tying together several plot threads to explain how Claire became the person we see in Jurassic World. The problem is there is a lot of bad dialogue and uninteresting romance before then, and the dinosaur action is almost non-existent.

I honestly wanted to like The Evolution of Claire. Given the plot centered around a group of young adults who visit Jurassic World before it opens to the public, I thought the novel would resemble those early, child-focused drafts of Jurassic Park. But the story plods along and shows surprisingly little interest in thrills or dinosaurs, both of which are hallmarks of the series. As a character study, the novel shows promise at the end, but I’m betting most readers will have lost interest before finishing the book. I recommend reading the novel only if you are a Jurassic Park completest.