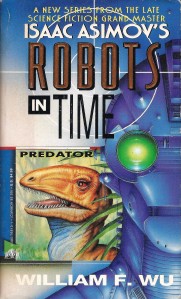 FROM THE MOST BELOVED NAME IN SCIENCE FICTION – A SPECTACULAR NEW ROBOT SERIES!

Governors are the ultimate in robot evolution. Composed of six separate robots, each can single-handedly run an entire human city. Now they have begun to fail mysteriously. The last unit, MC Governor, realizes its own destruction is approaching. The Third Law of Robotics comes into effect: a robot must protect its own existence.

To save itself, MC Governor breaks itself down into six component robots and launches its parts into the remote past. But there’s something MC Governor doesn’t know – time travel causes a change in its molecular structure. If its pieces are not returned to their own time, they will explode in a nuclear inferno, destroying the fragile web of human history.

Only an experimental robot named Hunter and a hastily assembled team of human experts have a chance to find the MC Governor robots before they change the past – and the future. Their first target is in hiding somewhere in the age of the dinosaurs. A robot determined to survive. A robot willing to be branded – PREDATOR.

Toward the end of his career, the late science fiction genius Issac Asimov explored the concept of robotics and time travel in his only robot time travel story. That tale, included here, inspired this new series – an adventure across time authorized by Asimov himself.

Perhaps the greatest claim to fame for an author is having your name appear on books you didn’t write. Issac Asimov had been dead for a year when the first of the six-book series Robots in Time came out in 1993. He had nothing to do with the series other than it was inspired by a short story he wrote about time-traveling robots. Still, his rock star status in the science fiction world has the power to sell books, which is why his name is displayed more prominently than that of the actual author, William F. Wu, who was hired by the publisher to write the series.

Unfortunately, Robots in Time doesn’t get off to a good start in Predator. The story centers around the disappearance of MC Governor, a Voltron-like robot that splits into six different robots that flee into the past out of fear they will be decommissioned by the humans who control them. A new robot called Hunter is built to seek out the six robots and return them to their proper time period. (Actually, Hunter resembles a human, so the correct term would be “android” if you wanted to be semantic about it.) Hunter deduces the first robot fled into the Cretaceous Period, so he assembles a team of three humans – a roboticist, a paleontologist, and an outdoor survival expert – to help him track down the rogue ‘bot. What the team doesn’t know is MC Governor’s creator has also traveled into the past to round up the six robots so he can salvage his reputation, no matter the cost.

Predator is a book with many flaws, but its greatest sin is it is simply boring. The stakes are not high and there is never any sense of danger despite the mingling of humans with dinosaurs. Here’s the thing: Good adventure stories need mystery and suspense. Mystery comes from withholding crucial information until a time when its revelation has the greatest dramatic impact. Suspense comes from creating tension, both through character conflict and through putting characters in seemingly unwinnable situations. Predator blunders on mystery by spending the first 50 of its 220 pages explaining the villain motivations instead of letting readers watch as the main characters unravel the clues. It blunders on suspense with human characters who are more bland than the robots that accompany them, so readers couldn’t care less about the petty fights they have. As for action, no character ever faces real danger. Hunter has super strength, so he easily fights off any dinosaurs that appear. Even the rogue robot doesn’t post any threat thanks to Asimov’s Three Laws of Robotics, which prevents robots from harming people.

The writing is bland and workmanlike, with most of the text just long stretches of bad dialogue. Wu puts no effort into describing either future Earth or Cretaceous North America. Several dinosaurs make appearances but they are mostly window dressing, disappearing after a couple pages never to be seen again. One exception is a Struthiomimus the protagonists catch and train to use as a mount in less than a day. That should give some idea of the quality of science in this science fiction novel.

There are five other novels in the Robots of Time series, but only Predator has dinosaurs.