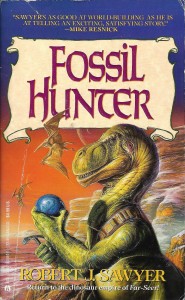 Note: This is the second novel of the Quintaglio Ascension trilogy, starting with Far-Seer. Spoilers ahead for the first book.

…teach that the first intelligent saurians emerged from the eighth and final egg of God. Toroca, son of Afsan the Far-Seer, is a geologist searching for the rare metals needed to take his species to the stars. But what he’s discovered instead is an artifact, immeasurably ancient, that may reveal at last the true origin of a world of dinosaurs!

Fossil Hunter is my favorite of the three novels making up the Quintaglio Ascension, perhaps because my obvious bias for the subject matter. It is about the rise of a dinosaurian Darwin, which seems a far more interesting premise than a dinosaur Galileo (Far-Seer) or a dinosaur Freud (Foreigner). Toroca, the son of the protagonist of the first book, is leading a geologic expedition to a distant part of the world, including the planet’s diminutive southern ice cap. The strange wildlife there, as well as the discovery of what appears to be an alien artifact by his team, forces him to reconsider his people’s explanation for the origin of life on his world.

Meanwhile, Afsan, now blind after the events of the first book, learns that one of his children has been murdered. He launches an investigation to track down the culprit. And if that weren’t bad enough, his friend, the Emperor Dybo, faces a challenge for the throne. It turns out the solution to the political crisis involves a really big arena and a really hungry Tyrannosaurus rex.

The main problem with Fossil Hunter is that it has too many plots. The murder mystery could have been easily dropped and the novel would have lost nothing except an extraneous 70-or-so pages. That said, the remainder of the book is a decent read, exploring in more detail how Sawyer’s dinosaur world came to be. Toroca faces a challenge in proving evolution in that the fossil record of his planet, unlike that of Earth, appears to point to a divine creation rather than the slow emergence of life. Also, the final confrontation between Dybo and his political opponent comes straight out of one of the quirkier episodes of original Star Trek, showing Sawyer wasn’t afraid of having a little fun with his invented world.