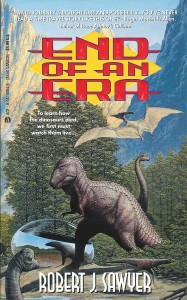 WHERE DID ALL THE DINOSAURS GO?

Paleontologist Brandon Thackeray wants to find out. With a newly developed, still-experimental timeship, he will be able to do what no human being has ever done: stand face-to-face with a living, breathing dinosaur. And what he and his partner are about to discover is more fantastic than any scientist’s theory: the truth about what happened at the twilight of the Cretaceous Era – and what really felled the dragons of Earth’s distance past…

A slightly silly but fun romp from the writer of the Quintaglio Ascension. Thanks to an experimental government time machine, paleontologist Brandon Thackeray gets the chance to travel back in time to the end of the Cretaceous Period to find out why the dinosaurs died out. Unfortunately, he’s stuck with a partner who happens to be sleeping with his ex-wife. (Great planning on the part of the mission control people.) The past turns out to be truly bizarre: The earth’s gravity is only about half that of what it is now, and there’s a second moon. The explorers also soon realize they’re not alone.

And, to complicate things further, a second Brandon from another timeline stumbles across notes from the expedition – an expedition he never took.

It’s hard not to like this book even if it does take itself a little too seriously given the craziness of the plot. It’s only 200 pages long, the appropriate length for this sort of thing. It’s also one of the few time travel novels to leave me with a sense of just how alien the Mesozoic would be to humans, although it has to use some strange plot devices to achieve this, like a second moon. Sawyer gets credit for the weirdest dinosaur extinction explanation I’ve ever encountered.