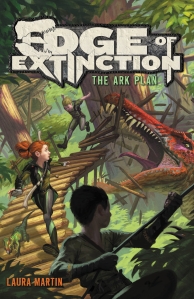 ONE HUNDRED AND FIFTY YEARS AGO: The first dinosaurs were cloned. With their return came a prehistoric pandemic that nearly wiped out the human race. The only way to survive was to move underground, allowing the dinosaurs to take over…

FIVE YEARS AGO: Sky Mundy’s father mysteriously fled their home in North Compound, one of four facilities where the last remnants of humanity have been trying to rebuild, leaving her all alone.

YESTERDAY: Sky discovered a cryptic message from him telling her the fate of the world depends on Sky delivering a memory card to someone above ground. No one survives above ground.

NOW: Sky is going anyway. Breaking out of North Compound with her best friend, Shawn, in tow, Sky has to try to fulfill her father’s impossible request. As Sky ventures topside into this lost world reclaimed by nature and ruled by dinosaurs, she will discover it is just as dangerous as she had always feared… but it’s also nothing like she had ever expected.

Don’t clone dinosaurs, kids. Nothing good will come of it.

That seems to be the life lesson imparted by Edge of Extinction: The Ark Plan, a young adult novel by first-time author Laura Martin. Set 150 years after cloned dinosaurs unleashed a plague that killed off most of humanity, the story follows 12-year-old Sky Mundy on her quest to possibly find her missing father. The publisher touts the book as “Jurassic World meets Dawn of the Planet of the Apes,” but really its spiritual predecessor is the comic Xenozoic Tales (a.k.a. Cadillacs and Dinosaurs), also set on a future Earth where dinosaurs have returned and taken over the planet. There is no evidence Martin knew about the comic when she wrote Edge of Extinction, which is a fun if somewhat by-the-numbers thriller.

Edge of Extinction is told from the first-person point of view of Sky, a social outcast in one of the few underground shelters where humans sought refuge from a plague that nearly wiped them out. Thanks to a brief history lesson near the beginning of the book, readers learn that in the past scientists learned how to clone dinosaurs, but in the process inadvertently brought back the diseases the prehistoric reptiles carried. The sudden disappearance of most people allowed dinosaurs to overrun Earth’s ecosystems. Humans are no longer at the top of the food chain, so Sky’s people rarely leave their underground shelters as travel on the surface is usually a death sentence. Sky decides to risk it after she receives a message from her missing father telling her to deliver a memory card carrying secret information to a drop-off point located in the middle of Lake Michigan. Soon afterward, our hero escapes the shelter with her best friend Shawn, pursued by both hungry dinosaurs and an evil government willing to kill to get its hands on the memory card.

If there was a checklist for clichés in modern young adult fiction, then you could mark off most of the boxes for Edge of Extinction. A headstrong central protagonist? Check. Parents either dead or missing? Check. A larger, shadowy conspiracy driving events? Check. Two male friends who could turn into rival love interests for the female hero? Check. Edge of Extinction certainly doesn’t reinvent the wheel when it comes to children’s literature, but stories have never needed to be groundbreaking to be entertaining. Martin’s first novel strikes a nice balance between worldbuilding, character moments, and chase scenes. There is quite a lot of action crammed into the book’s 250 pages, but it is interspersed with long stretches of Sky exploring her future Earth and developing her relationships with the two other main characters. Whenever the pace threatens to sag, Martin adds another wrinkle to the book’s central mystery or throws in a dinosaur to menace our heroes.

That said, few first novels are without flaws. Besides the numerous cliches already mentioned, I found the dialogue somewhat stilted. The 12-year-old protagonists at times talk more like child characters out of a 1950s movie than any preteens I’ve met. Edge of Extinction also is the first book in a planned series, so don’t go into it expecting many answers to the mysteries it raises or tidy resolutions to any of its conflicts. (The novel concludes with a sample chapter from the sequel, titled Edge of Extinction: Code Name Flood, which will be published in 2017.)

If any of the above criticisms are starting to dissuade you from picking up Edge of Extinction, then let me reassure you that the book’s positives outweigh its negatives. You will enjoy it, and hopefully so will any kids you can pry away from their video game consoles long enough to do a little reading. (Seriously, get them away from video games, because I’m getting tired of 10-year-olds kicking my butt in Star Wars: Battlefront.)

One thought on “Edge of Extinction: The Ark Plan by Laura Martin (2016)”