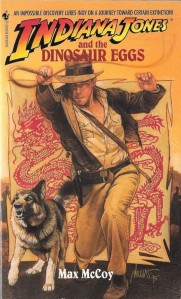 Fresh from a ride on a Nazi submarine, Indiana Jones is persuaded by a beautiful missionary to search for her missing father in Mongolia. Professor Angus Starbuck has discovered a dinosaur bone in the Gobi Desert. But unlike other such discoveries, this bone isn’t ancient! As Indy crosses from China through a treacherous mountain pass to Outer Mongolia, he runs afoul of the region’s fiercest warlords. Meanwhile the world’s last innocent people, dwelling in a Stone Age paradise, are poised on the brink of destruction. Suddenly Indiana Jones is dueling wild dogs and bloodthirsty killers in a desperate effort to save the most historic discovery of the twentieth century: the last living Triceratops!

As far as tie-in novels go, I admittedly have more interest in Indiana Jones than Star Wars or Star Trek. So crossing the famous film hero with a story about living dinosaurs should be a sure hit with me, right? Well, no.

After an encounter with archenemy Rene Belloq and a crystal skull (!), Indy is approached by an attractive woman who tells him that her scientist father has disappeared in central Asia. The archeologist sets off to find the missing man, and along the way encounters Chinese warlords, fresh dinosaur eggs, legends surrounding the Garden of Eden, and a one-eared dog named Loki.

The obvious inspiration for Indiana Jones and the Dinosaur Eggs was the real-life adventures of explorer Roy Chapman Andrews, a man often inaccurately described as the historical figure the character was based on. Andrews led a series of expeditions to Inner Mongolia during the 1920s, and during one of the trips his team discovered the first scientifically documented fossilized dinosaur eggs. The setting provides plenty of opportunities for adventure – Mongolia at the time was a largely lawless land filled with petty bandit warlords. But The Dinosaur Eggs is a forgettable tale that, for me, never really captured the excitement of the movies. Part of the problem came with the characterization of Indy, who lacks his trademark cynicism in this novel. The action scenes are not particularly thrilling or suspenseful and the central mystery about the dinosaur eggs is clumsily resolved. Then there’s the dog, which exists only to provide a whopping deus ex machina ending.

The Dinosaur Eggs has long been out of print and doesn’t appear to be available in digital format, but don’t go to too much trouble tracking this one down.