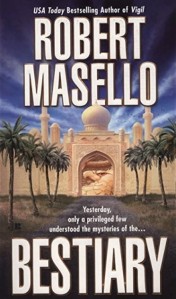 Release the beasts of Eden…

A manuscript illuminated with fantastical creatures said to have roamed the Garden of Eden, the bestiary has been handed down throughout the centuries by one of the Arab world’s most prominent families. Commissioned to restore it is the beautiful young art curator, Beth Cox.

But it is Beth’s husband, Carter – a young paleontologist making his own dire discoveries in Los Angeles’s famed La Brea Tar Pits – who will be led by the bestiary into a living, breathing menagerie of wonders… and horrors.

… and you open the Gates of Hell.

Now, myth and reality are about to collide. Carter wills step back into a world before time… and unleash the creatures that haunt our dreams and nightmares.

Imagine if the dinosaurs in Jurassic Park didn’t show up until the last 15 minutes of the movie, and for the two hours before that we got to watch the film’s unexciting characters go out on dates, take hikes in the woods, look after their kids and do other everyday things. The result would be Bestiary.

Bestiary is an interesting wreck of a novel because Masello has a great idea, but he squanders it like a sailor’s paycheck while at port. Beth Cox is assigned by her employer to preserve a previously unknown medieval bestiary titled The Beasts of Eden, which belongs to a wealthy family who has recently fled Iraq. Its pages are filled with life-like images of creatures from folklore, but, of course, if the animals were mythological, the novel wouldn’t be featured here. Her husband Carter, a paleontologist at the La Brea Tar Pits, is slowly drawn into the mystery after the owner of the manuscript realizes that Carter’s unique profession may be what he needs to keep his private collection of strange animals alive.

Bestiary fails on so many levels. It is a boring, over-bloated thriller, filled with plot threads that go nowhere and no sense of pacing or suspense. There are hints of a mystery involving Native American remains at the tar pits, a subplot involving an oddly aggressive pack of coyotes and the introduction of a supernatural being from Masello’s first novel, Vigil, but none of these have any relevance to the main plot, are themselves never resolved and only serve to stretch Bestiary out to a grotesque 450 pages. Even the bestiary of the title is ultimately unimportant in the grand scheme of things.

The characters themselves are bland. Most of the first 400 pages is simply spent following their mundane lives around, and the main plot about the exotic zoo largely takes a back seat until the final 50 pages when the creatures break free. I sincerely doubt most readers will make it that far.

One thought on “Bestiary by Robert Masello (2006)”