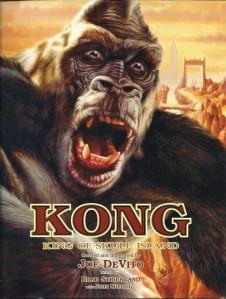 In 1932, American showman Carl Denham returned from a mysterious, hidden island with a priceless treasure – a treasure not of gold or jewels, but the island’s barbaric god, a monstrous anthropoid bearing the name of “Kong.” The savage giant escaped and wrecked havoc through the concrete jungle of Manhattan, but within hours of the beast’s death plummet from the peak of the Empire State Building, his body – and Carl Denham – disappeared. Twenty-five years later, the son of Carl Denham makes a shocking discovery that leads him to the site of his father’s greatest adventure and to answers that will unlock the secrets surrounding nature’s greatest miracle… and history’s greatest mystery.

Authorized by the estate of King Kong’s creator, Merian C. Cooper, Kong: King of Skull Island is a lavishly illustrated novel that acts as both prequel and sequel to the classic novel King Kong. Created by the acclaimed illustrator Joe DeVito and co-written by DeVito and top fantasy and science fiction author Brad Strickland (with John Michlig), Kong: King of Skull Island remains true to the classic Kong legend while illuminating new discoveries that will deepen the original story. Introduction by special-effects master Ray Harryhausen (The Seventh Voyage of Sinbad).

Kong: King of Skull Island is a sequel to the classic 1933 film King Kong that pretends that the official sequel, Son of Kong, never happened. After the events of the movie, Carl Denham, the showman who brought Kong to New York, disappears along with the body of the giant ape. Fast forward to 1957, when his son, paleontologist Vincent Denham, finds his father’s map showing the hidden location of Kong’s home, Skull Island.

Denham recruits an elderly Jack Driscoll – the hero of the first film – to take him to the island. Once there, Denham is injured while making his way to shore and ends up in the care of an elderly native woman known as the Storyteller. She lives up to her name by telling Denham a story about a native princess, the tribe’s first encounter with white people, a cult that worships an evil beast god named Gaw, and young giant gorilla who would one day be known as Kong…

Kong: King of Skull Island is part-novella, part illustrated coffee table book. DeVito provides the background story and illustrations while Strickland and Michlig flesh out the text. The art is a mix of black-and-white drawings and full-color paintings. I preferred former to the latter, as most paintings appeared hazy and washed-out, like looking at a scene through a greasy lens. That’s not an indictment of DeVito’s artistic skill, which is considerable. It’s more a reflection of my own taste in art than any failings of the artist.

As for the text, it’s serviceable. The movie was a non-stop thrill ride, and Kong: King of Skull Island has plenty of action scenes for adventure lovers. But the book also delivers some heavy-handed messages about cultural relations and – strangely – religion while trying to explain away many of the mysteries of the setting: Why did the natives build a giant wall? Where did Kong come from? And why do the islanders make sacrifices to the giant ape? The authors’ skills are not up to telling anything more than a simple action tale, so when they try to get profound, it comes off as awkward and forced. They would have been better off if they had stuck to the film’s pulp adventure tone.

Kong: King of Skull Island is probably not worth tracking down unless you’re a big fan of the original movie. I give the book’s creators credit for trying to expand the film’s universe, but at the same time feel like they missed the point: King Kong was about mystery and adventure, not self-reflection and religious mysticism. The book is a better sequel than Son of Kong, but still lacking when compared to the source material.