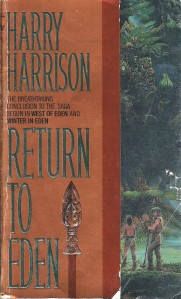 Note: This is the final book of the West of Eden trilogy, starting with West of Eden. Spoilers ahead if you haven’t read the first two books.

In West of Eden and Winter in Eden, master novelist Harry Harrison broke new ground with his most ambitious project to date. He brought to vivid life the world as it might have been, where dinosaurs survived, where their intelligent descendants, the Yilane, challenged humans for mastery of the Earth, and where the human Kerrick, a young hunter of the Tanu tribe, grew among the dinosaurs and rose to become their most feared enemy. Working in collaboration with an international team of scientific experts, Harrison created a believable, richly detailed world rivaling Frank Herbert’s Dune and Jean Auels’s The Clan of the Cave Bear in the majesty of its scope and conception.

Now, in Return to Eden, Harrison brings the epic trilogy to a stunning conclusion. After Kerrick rescues his people from the warlike Yilane, they find a safe haven on an island and there begin to rebuild their shattered lives. But with fierce predators stalking the forests, how long can these unarmed human outcasts hope to survive? The small band of humans have no choice but to confront their fate head on. And, of course, Kerrick cannot forget Viante, his implacable Yilane enemy. She’s been cast out from her kind, under sentence of death, but how long will her banishment last? For her strange attraction to Kerrick has turned into a hatred even more powerful than her instincts – an obsession that compels her to hunt down Kerrick and kill him.

Return to Eden is the “threequel” that can be easily skipped without any worries that you have left the story arc started in West of Eden incomplete. Most of the plot threads are resolved in the second book of the series, Winter in Eden. The result is the characters in Return to Eden have nothing to do, and the book lacks any real plot, instead reading like a grossly bloated epilogue of the first two novels. Kerrick, having made the world safe for humanity, now focuses on raising his family and finding a home for his tribe. The Daughters of Life slowly build their peaceful society in the Amazon. And Viante, now an outcast, plots her revenge. These separate storylines are drawn out over a tedious 400 pages, coming together in the end in a whopping anticlimax.

By now the alternate world of the Yilane has lost its charm, and the lack of any real story makes this book a difficult one to read through to the end. The science, which was dated when West of Eden was first published six years previously, was even more dated when Return to Eden hit bookstores. And Harrison seems to have lost interest in the setting he created. The novel feels like it was written mainly to fulfill a contractual obligation to the publisher to turn out a trilogy. Unless you have a burning desire to learn about the ultimate fates of many of the characters to the first two books, there is no reason to pick up Return to Eden.