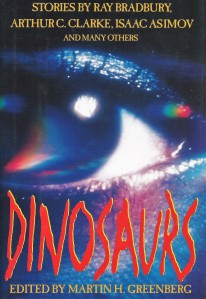 Though gone from the world for sixty-five million years, dinosaurs live on with mythic power in the human imagination. Here, editor and award-winning anthologist Martin H. Greenberg assembles fourteen classic stories featuring these at once fearsome and awe-inspiring creatures, whose enigmatic and sudden disappearance may account for part of our enduring fascination. Arthur C. Clarke, Ray Bradbury and Isaac Asimov are among the many notables who breathe life back into the dinosaurs in this imaginative collection.

Sure, I realize this anthology was slapped together simply to make some money on the dinosaur craze that had gripped the public between the first two Jurassic Park films, but come on… A picture of someone’s eye for the cover image? I mean, couldn’t have publisher just used some stock art of a reptilian eye instead? Or better yet, how about actually paying an artist to design a cover image? Artists need to eat, after all. (So do writers and bloggers, for that matter.)

That said, this anthology proves true the old saying about not judging a book by its cover, because it is a very good collection of dinosaur-related fiction. The only downside is the book can be hard to find these days.

The two best stories are two classics of paleo-literature. “The Fog Horn” by Ray Bradbury is the story of a lighthouse fog horn that calls a very lonely reptile from the ocean depths. “A Gun for Dinosaur” by L. Sprague de Camp is the first Reginald Rivers story, with the author’s time-traveling safari guide explaining to a client why he will only take men of a certain size dinosaur hunting.

Other highlights of the anthology include “Time’s Arrow” by Arthur C. Clarke, a time-travel story with a twisted ending; “Shadow of a Change” by Michelle M. Sagara, which concerns a shy woman who undergoes a strange transformation; “Wildcat” by Poul Anderson, about an oil-drilling operation in the Jurassic Period; and “The Last Thunder Horse West of the Mississippi” by S.N. Dyer, a story where the famous rivalry between Edward Drinker Cope and O. C. Marsh reaches critical mass when the two discover a living sauropod.

The remaining stories are all strong and nicely fill out the volume. Some of the tales are decades old, so the science isn’t exactly up-to-date, but that doesn’t diminish their entertainment value.