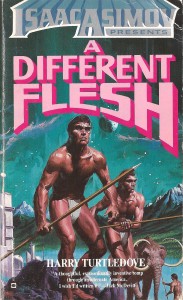 NEITHER MAN NOR BEAST

What if when Columbus came to the New World he found, not Indians, but primitive apelike men who were soon dubbed “sims”?

These immediate ancestors of modern man were less effective hunters, allowing prehistoric creatures such as mammoths and saber-toothed tigers to survive. Unable to learn human speech or conceptualize at a human level, sims could, however, be trained to do reliable work… as slaves.

Harry Turtledove probes this intriguing concept, exploring such historical and social issues as the Darwinian hypothesis, the Dred Scott decision and AIDS. Once again the author of the acclaimed Agent of Byzantium asks “what if” – and makes it a reality.

A Different Flesh is an anthology consisting of seven short stories chronicling the colonization of the New World, from the first English settlement of Jamestown to roughly the modern day. According to Turtledove, colonization of the West would be much more rapid, since man’s ancestors – called “sims” (not the little computer game people) – offer none of the resistance the Indians did. The politics are familiar but slightly different, the USA being replaced by the “Federated Commonwealths of America.” Missing are the Indian names given to familiar landmarks and cities, such as the Mississippi river, which is now called the New Nile.

Also surviving are North America’s Ice Age megafauna, which play a major role in two stories: “Around the Salt Lick,” concerning the exploration of the virgin Appalachian mountains; and “The Iron Elephant,” about a race between a steam train and a domesticated mammoth.

Mostly Turtledove uses the sims to explore history’s moral dilemmas in a new light. Evolution is theorized long before Darwin. Slavery is abandoned because the less intelligent sims nicely fill the role of Africans. Sims also turn out to be great test subjects for treatments for HIV, although they’re far more human than apes or chimpanzees.

Turtledove is a skillful writer and every story is a good read. The sims are well-realized. They walk a fine line between human and animal, and Turtledove is careful not to push them in either direction, or to take sides on an issue in a story (although he lets readers know in his introduction his sympathies lie with the exploited sims).

A Different Flesh was recently republished as an ebook by Open Road Media and is available in different formats.

2 thoughts on “A Different Flesh by Harry Turtledove (1989)”