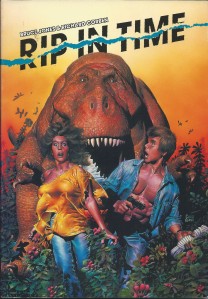 Off-duty police officer Rip Scully (hence “Rip” in Time) and his fiancé Maggie are on their way to a party when they stop at a liquor store to buy wine. As Rip is making his purchase, a street thug, Sid, and his girlfriend, Darlene, barge into the store to rob it. Sid shoots the clerk, causing Rip to draw his own gun and shoot back, but he misses. Sid runs outside, grabs Maggie as a hostage, then flees the scene with her in Rip’s car. Rip figures two can play that game: He grabs Darlene – who Sid has left behind – hotwires a car and pursues Sid. Their chase leads them to a secret military base that is conducting time travel experiments. Sid and Maggie go racing through a time portal leading to the Mesozoic, with Rip and Darlene in hot pursuit. Rip is determined to save Maggie from Sid and the dinosaurs, but the military personnel who run the base don’t want anyone coming back alive.

Rip in Time was a five-issue comic miniseries first released in 1986 and later published as a single volume in 1990. The artist, Richard Corben, is somewhat famous in the comic book world, mostly for his work in Heavy Metal magazine. There is no denying his talent as most of the art in Rip in Time is fantastic. It’s the writing that leaves much to be desired.

Rip in Time is an adult comic heavily influenced by 1970s-1980s action movies. These movies were far from politically correct, often featuring gratuitous violence, racial stereotypes, and the occasional rape scene. Sadly, Rip in Time has all three. The story doesn’t get off to a good start when one of the first scenes involves a male scientist sexually harassing his female boss, which includes the revelation he has been secretly filming her in the shower room. The whole thing is played for laughs as the scientist is actually one of the good guys. (Oh that lovable scamp!) The sexism doesn’t stop there. Later, when Sid kidnaps Maggie, he is constantly threatening her with rape. Fortunately when the rape comes, it isn’t shown. Unfortunately, we get to see Sid beating Maggie right before he violates her, and it is implied she enjoys it. And did I mention Sid the violent rapist is the only dark-skinned character in the story? Ugh.

The writing is terrible all around, with silly dialogue and character motivations that don’t make sense. The bright spot is the comic’s black-and-white art. Corben’s drawings are stylized yet extremely detailed. (You can see examples here, here, and here.) He sometimes tries to squish too much action into too small a space, resulting in deformed people, but for the most part the art is very atmospheric. The Mesozoic is portrayed as a Skull Island-like prehistoric wilderness that, while not scientifically accurate, sure is pretty to look at. The dinosaurs were obviously inspired by Charles R. Knight paintings, almost to the point of plagiarism: Corben’s T. rex and Triceratops come straight from this painting. That said, he nails the style so well it’s hard to hold it against him.

I love the art and Rip in Time has a few good action scenes, but I can’t recommend the comic. The horrible writing holds it back. The series is interesting only as a failed marriage between prehistoric adventure stories and violent 1980s action flicks. Call me a prude, but I like my dinosaur stories to be a little less rapey.