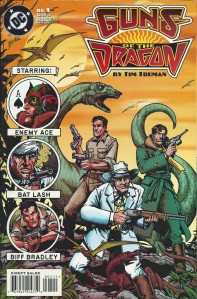 Shanghai, 1927. China is divided by civil war. In an effort to unify the country, Chinese nationalists along with the U.S. Army recruit three obscure DC Comics heroes – Bat Lash, Enemy Ace, and Biff Bradley – to recover a pair of mythological swords. The catch? The swords are located on the long lost “Dragon Isle,” and the heroes must also bring back a dragon to convince the Chinese the legend is true. And if that wasn’t enough, it turns out the communists, Japanese and supervillain Vandal Savage also want the swords – and they’re willing to kill for them.

Guns of the Dragon was a four-part miniseries published in 1998 and 1999 by DC Comics. The idea came from writer and illustrator Tim Truman, who wanted to pen a pulp adventure in the spirit of Indiana Jones but using DC characters appropriate for the time period. He also decided to set most of the action on Dinosaur Island, a location that was featured prominently in the War that Time Forgot, a 1960s comic about World War II soldiers fighting dinosaurs on an isolated Pacific island.

As for miniseries itself, all the pieces are there for a good story, and the plot gets off to a decent start in the first issue. But once the characters reach the island things fall apart. The main problem is there are simply too many villains, and their competing storylines break up the action. The art is inconsistent – sometimes it is really good, other times it is simply serviceable. And for a comic that came out several years after Jurassic Park, the dinosaurs are a disappointment. They are drawn as lumbering, tail-dragging behemoths. I would have rather seen them portrayed as the active, agile creatures we know they were.

That said, Guns of the Dragon is an interesting piece of DC lore that fans of the comic universe may appreciate more than I did. Unfortunately, the miniseries has never been collected in a single volume. You will need to find the individual issues online or in a comic book store.