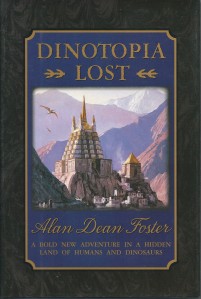 This thrilling tale of high adventure set in the world of James Gurney’s Dinotopia, the extraordinary uncharted island where humans and dinosaurs live in harmony, features all the colorful wonder and wining characters that have won this “land apart from time” millions of fans all over the world.

In all Dinotopia’s countless centuries, rarely has a vessel reached her peaceful shores except as a splintered wreck, until a mighty, storm-swollen breaker hurls the pirate ship Condor beyond the treacherous fangs of the coral reefs that surround the island. When marauding pirates capture a dinosaur family, young skybax pilot Will Denison leads a tiny band of rescuers on a pursuit that takes them into the perilous Rainy Basin, where tyrannosaurs still stalk the steamy forest long abandoned by civilized Dinotopians. Doggedly tracking the invaders, Will and his dinosaur companions must face both the cruelty on ancient instincts and the brutality of modern ignorance as they race toward a fateful confrontation at the breathtaking climax of a once-in-a-lifetime typhoon.

A harrowing tale of suspense, courage, and triumphant cooperation between creatures great and small, Dinotopia Lost will be relished by both newcomers to this exotic and magical realm and those who have already made the voyage.

Throw together Treasure Island with a lighthearted version of Jurassic Park, and you will end up with something very much like Dinotopia Lost.

Dinotopia Lost is the first in what became a series of novels set in artist James Gurney’s Dinotopia. Most of the books are for kids, but Dinotopia Lost was written for adults and kids alike.

The plot is pretty simple. A group of scurvy pirates safely land their ship on the coast of Dinotopia after a storm surge carries them over the coral reefs that protect the island continent. The pirates, of course, have never seen dinosaurs before, and mistaking the animals for dumb beasts, they capture a family of the ostrich-like Struthiomimus so they can sell the dinosaurs to the outside world. One of the dinosaurs escapes and alerts a nearby village of the danger. Skybax rider Will Denison leads a rescue mission to free the family, but complicating things is the fact that the pirates are walking right into the carnivore-infested Rainy Basin, and they’ve captured a young T. rex whose parents won’t be happy to learn the news…

Dinotopia Lost is a decent attempt to tell an old-fashioned adventure story while remaining faithful to the non-violent nature of Gurney’s books. In fact, anyone picking up the novel who has never read the original Dinotopia stories will have no clue about what’s going on. The writing itself is pretty good from a technical standpoint, with Foster knowing how to create colorful descriptions with just a few words. And the pirates are appropriately villainous if a little toothless because of the aforementioned non-violent nature of the setting.

One issue I had with Dinotopia Lost is that plot could’ve been better paced. The storyline meanders quite a bit, never finding a real focus until midway through the novel when Will launches his rescue mission. The pirates get quite a bit of ink, so much so that for a good part of the novel the heroes are little more than a supporting cast. Still, things pick up once the rescue is underway, and the resolution to the story keeps with the optimistic tone of Gurney’s works.

Dinotopia Lost won’t please anyone approaching it hoping to see realistic depictions of dinosaurs, because like in Gurney’s books, the animals are depicted as smart as humans. But fans the setting should enjoy this fantasy adventure.