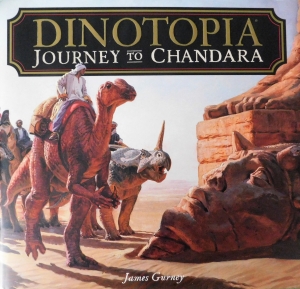 After many years of searching, artist James Gurney has discovered in a used bookstore a never-before-seen journal by the nineteenth-century explorer Arthur Denison. Denison’s previous travel accounts, published as Dinotopia: A Land Apart from Time and Dinotopia: The World Beneath, introduced a lost island where dinosaurs and humans live together in peaceful interdependence.

Now Professor Denison and his saurian companion, Bix, set out on a perilous journey to the forbidden empire of Chandara. When their personal invitation from the emperor goes missing, they are forced to cross the border penniless and in disguise. Every step of the way, Denison documents in exquisite detail the creatures, characters, and architecture he encounters: a village composed of three ships propped up on end, a fifty-foot-tall Brachiosaurus outfitted for fire fighting, an Allosaurus tending its hatchlings, young pilots air jousting on giant pterosaurs, and a lot more.

The land of Dinotopia is conjured by a brief but vivid narrative and a beguiling variety of visuals, including maps, cutaway views, and mechanical diagrams. The lives of the humans are intertwined with those of the dinosaurs and ancient mammals, all of which are actual species portrayed according to the latest scientific research. By turns whimsical, dramatic, and philosophical, the journal radiates a life-affirming vision that will cast a new light on the overlooked wonders of our own world.

The Italian explorer Marco Polo made many hard-to-believe claims about his famous journey to China – some people even question whether he went at all – but the one thing he never did claim to see was dinosaurs. Only in the world of Dinotopia would such a thing be possible.

Dinotopia: Journey to Chandara is essentially a retelling of Marco Polo’s travels, but set in the imaginary continent of Dinotopia. The book, the fourth in James Gurney’s series, returns to the journal format of the first Dinotopia. Not only is Journey to Chandara the best sequel in the series, in some ways it surpasses that first work.

Journey to Chandara takes place not long after the events of The World Beneath, with the scientist and explorer Arthur Denison anxiously awaiting word about whether he will be allowed passage to the mysterious city. Chandara, we learn, is one of the great centers of Dinotopian civilization, rivaled only by Waterfall City. Relations with Chandara have soured because the democratic-minded people of Dinotopia objected to the city’s style of government, with the Emperor Hugo Khan ruling supreme. Chandara cut off trade and diplomatic relations with the rest of Dinotopia as a result, and it has been so long since anyone has visited the city that little is known about it.

Denison and Bix, a Protoceratops, are invited by Hugo Khan to travel to Chandara, which will make them the first outsiders to journey to the city in decades. Events take a turn for the worse when their invitation is stolen by the villainous Lee Crabb, but instead of giving up, the two set off on the journey in hopes of eluding the border guards and making their way into Chandara. Along the way they will brave bandits, predatory dinosaurs, hostile environments and a culture that is wary of outsiders.

In many ways, Gurney seems to be trying to recapture the spirit of the first Dinotopia book in Journey to Chandara. Both start with the artist stumbling upon one of Arthur’s forgotten journals, and both share similar images, such as a group of kids running along a beach with a sauropod or a visit to a snow-covered mountaintop temple. The difference here is that Gurney has refined his skills as both an artist and a storyteller. Journey to Chandara combines the first-person narration of first book with the focused storyline of The World Beneath. The characters are not just wandering Dinotopia to see the sights. They have a goal in mind and must undergo hardships to reach that goal. They meet interesting characters along the way and come across several different cultures that parallel real-world civilizations, but with their own twists – my favorite being a group of very anti-Pilgrim Pilgrims.

Of course, Dinotopia is most famous for its dinosaurs, and keeping with the Asian theme of the setting, several species of feathered dinosaurs discovered in the Gobi Desert make appearances throughout Journey to Chandara. Sporting feathers or scales, the terrible reptiles are depicted with an amazing amount of realism, and they are incorporated into human society in imaginative ways. After all, what kid wouldn’t want to ride in a school bus carried on the back of an Apatosaurus? The landscapes, architecture and people are all painted with the same painstaking detail.

The production values of the book also are top-notch, with a map of Chandara printed inside of the dust cover, the cover stamped to look like dinosaur hide and the book sporting a cloth bookmark. Sure, these are tiny things, but they make readers feel they got the most out of paying the $30 cover price.

The Dinotopia books are children’s books, but Journey to Chandara has plenty for dinosaur-loving adults as well. This is a book that parents will want to read even when their kids are not around, if just to ogle at the gorgeous illustrations.