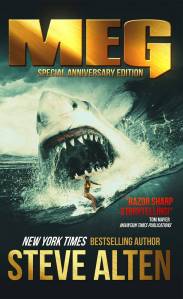 On a top-secret dive into the Pacific Ocean’s deepest canyon, Jonas Taylor found himself face-to-face with the largest and most ferocious predator in the history of the animal kingdom. The sole survivor of the mission, Taylor is haunted by what he’s sure he saw but still can’t prove exists — Carcharodon megalodon, the massive mother of the great white shark. The average prehistoric Meg weighs in at twenty tons and could tear apart a Tyrannosaurus rex in seconds.

Written off as a crackpot suffering from post-traumatic stress disorder, Taylor refuses to forget the depths that nearly cost him his life. With a Ph.D. in paleontology under his belt, Taylor spends years theorizing, lecturing, and writing about the possibility that Meg still feeds at the deepest levels of the sea. But it takes an old friend in need to get him to return to the water, and a hotshot female submarine pilot to dare him back into a high-tech miniature sub.

Diving deeper than he ever has before, Taylor will face terror like he’s never imagined, and what he finds could turn the tides bloody red until the end of time.

You’re gonna need a bigger boat… like an aircraft carrier.

I’m sure there are more than a few movie-goers who wished that instead of picking a great white shark as the villain in Jaws, author Peter Benchley should have chosen the prehistoric super-shark, Carcharodon megalodon. The novel Meg by Steve Alten wants to fulfill that wish, but it fails horribly. It isn’t Jaws as much as it is Jaws 3-D.

The novel opens 70 million years ago with an ocean-bound T. rex becoming dinner for a megalodon — never mind the shark didn’t evolve until millions of years later. (The scene exists solely for the purpose of trying to upstage Jurassic Park.) Fast forward to the modern day. Paleontologist Jonas Taylor (get it?) is dealing with a scientific community who thinks he is a quack for claiming to have seen a living megalodon, plus he has an unfaithful wife. (Think she is going to become shark chow?) Jonas is given a chance to prove he is not a quack by taking an experimental submarine to the bottom of the Marinas Trench, where he finds a living megalodon, but things go wrong and the shark escapes to the surface. The shark is soon eating whales and people, and it’s up to Jonas to stop the creature.

Meg is a novel that exists solely for the purpose of being turned into a movie, and not a very good movie at that. It is often unintentionally funny, with bad writing, numerous scientific errors and no sense of subtly or even logic. It may be lazy to point to another person’s review in your own review, but the well-known biologist and author Richard Ellis perfectly summed up my feelings about this book when he wrote:

Not only is (Meg) not the slightest bit terrifying, it is unintentionally, hilariously funny, largely because almost every page contains a genuine howler. Whenever the author discusses biology, paleontology, oceanography, or any other recognized scientific subject, he gets it wrong. It is obvious that Alten equipped himself with a book about sharks, a study of submersibles, some weirdly off-base material about whales, and everything that Peter Benchley, Michael Crichton, and Clive Cussler ever wrote, and then mixed them together to produce an almost totally incoherent story, in which the human characters make no sense, the sharks and whales behave like unknown animals from the planet Zarkon, and the technology sounds like a cross between Rube Goldberg and Buck Rogers.

When Doubleday published Jaws in 1975, they paid Peter Benchley an advance in the mid-four figures. Now the same publisher has joined the ranks of those who can twist their own definition of literature (there must be another name for this stuff) to justify paying a million dollars for this outrageously awful book, crammed with egregious errors of fact, and stuffed to the gills with writing so awful that it would insult the intelligence of a sea cucumber…

I am more than a little embarrassed to see than in his author’s note, Alten acknowledges me and John McCosker for our book “Great White Shark” as “an excellent source of information on both Megalodons and great whites.” If “Meg” is what we spawned, then we ought to be ashamed of ourselves too.

That’s OK, Richard — I forgive you.